Akrasia: The Lack of Self-Control 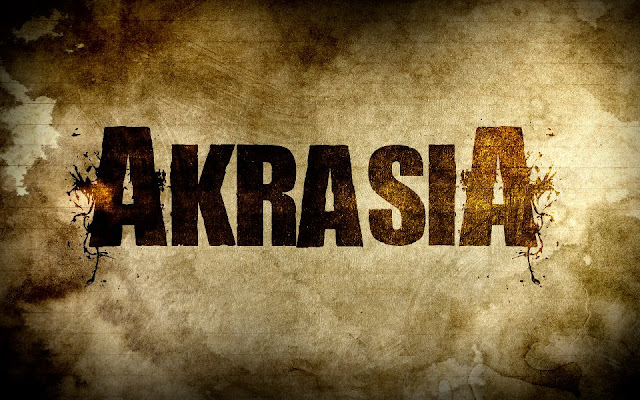 I just learned a fascinating new word: "akrasia". No, it's not a central Asian country between Kazakhstan and Kyrgyzstan. It means "lacking control over oneself." What a fascinating topic! You could say the biggest challenge of life is our battle with akrasia, the self-defeating impulses we all have inside us.

Someone tweeted the word to me yesterday in response to something I said. "I hate this speech from people who lack akrasia," he said, "like someone who is naturally thin making fun of people who can't lose weight."

I raced to my (virtual) dictionary, and sure enough, the word is real! "The state of acting against one's better judgement." As used in this tweet, akrasia seems like some kind of disease. If you are afflicted with it, though no fault of your own, then you lack the control to quit drugs or stop eating or do something healthful you know you should be doing. People don't have self-control, they "lack akrasia". As used this way, akrasia sounds like something you are born with, perhaps due to some physical defect in the brain.

I don't believe such a diagnosis exists because if it did, we would all warrant it! Everyone acts against their own best judgment from time to time. It's just that some people do it more than others.

Right now I'm engaged in my own struggle to lose weight, and I'm fighting akrasia every step of the way. Cut through all the weight loss bullshit and it all comes down to putting less calories in your mouth than your body is using and doing it consistently every day. No one has more control over what you eat than you do. Regardless of where the food comes from or how it is promoted, you are the one who picks it up and sticks it in your mouth. If you "know" you shouldn't eat something but do it anyway, that's naked flaming akrasia. Nearly 100% of the challenge of losing weight is finding ways to defeat these impulses.

I consider myself low on the akratic scale, but I admit that many days are a struggle. One problem is my wandering hand, which seems to have a mind of its own. If I am working on my computer and there is a bowl of delectable snacks within reach, I know those snacks will get eaten. It's not my own doing, mind you. It's the hand! My whole body can resist the snacks at first. I see them, consider the consequences and tell myself, "No." My willpower seems to work, but only for a while. Once I become engrossed in something on the computer, my conscious mind forgets about the snacks, but my hand doesn't. At some point, when my guard is down, the hand reaches over and—quite automatically and without my permission—snags the delectables and aims them toward my pie hole. By the time my superego comes back online and realizes what is happening, half the bowl is gone.

I admit I have virtually no control over this. Once I let my guard down, my akratic hand will do what it wants, and I have to let my guard down to get anything done. So what do I do? I do the same thing any responsible parent would: I keep all fattening snacks out of the hand's reach. I don't buy them. I don't store them anyplace where the hand can get them. Turns out the hand is a clever bugger who can even motivate my body to go to the refrigerator, so (when I have a refrigerator) I don't keep anything there I know my hand shouldn't handle. 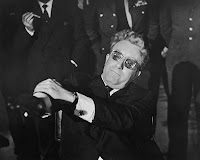 Isn't this cheating? If I claim to have "self-control", then I should be able to reign in my hand in real time, but I find this to be more of a challenge than I anticipated, so rather than fighting my own hand a la Dr. Strangelove, I approach the problem on a pragmatic higher level. The hand can't snag the snacks if the snacks don't exist.

"One Day At A Time," as they say. I'd like to have perfect self-control, and maybe I will someday, but until that happens I am willing to use whatever self-management tricks get me through the day.

Akrasia seems bizarre only when you consider each person to be a single uniform entity in charge of all its own functions. In fact, each of us is more like a whole community. Yes, there is a conscious manager technically in charge, but there are a lot of other forces operating within the organization that the manager has little direct control over. The conscious brain is more like the parent in a house full of rebellious children. It can often be difficult to directly tell the children what to do. A parent usually has better success in managing the environment in which they operate. That's the job of parents: to see the big picture of where current behavior will lead and make management decisions accordingly.

I may not have much direct control over my akratic hand, so I use whatever other tools are at my disposal to manage his behavior. For example, I can learn the exact caloric content of every piece of food, so when the hand touches something, numbers jump into my head telling me what I am dealing with. Sometimes, my hand reaches for something, I run the numbers and tell him, "Go ahead, we can eat that." Sometimes you fight your children, and sometimes strategic appeasement is the way to go. Parenthood is an art, not a science.

The important thing is to know your children. Part of the problem of akrasia is setting unrealistic goals based on theory instead of experience. You can say, "I will do 50 sit-ups every day" then beat yourself up about it when you fail, but the goal was absurd to begin with. Success lies, in part, in adjusting your goals and methods according to the conditions you actually encounter. If you try to lose weight but set rigid and overly ambitious standards, then you are more likely to fail, at which point you might say "fuck it!" and go right back to gorging.

The funny thing about akrasia is it's a self-fulfilling prophesy. If you believe you have no control then it will indeed come to pass. Even the word "akrasia" is dangerous, as in "My akrasia prevents me from losing weight." As soon as you've said it then you have given yourself an excuse to stop trying.

The world erects plenty of real barriers in our path, but the solution to overcoming them usually lies in changing our own behavior. The key is usually approaching the problem from a different angle, one we never considered before. The main thing that sets highly akratic people apart from others is they run straight into the barrier, get frustrated and immediately quit. Having "self-control" is not so much a matter of powering over the barrier but stepping back, analyzing the data, then trying things from a different angle (like I did with my hand).

Obese people look at the thins and say, "They are naturally slim," or "They have more willpower than me," but those things may not be true. Many of the thins may be just as vulnerable but are willing to try more angles of approach. They don't cry "I can't do it!" at the first frustration.

Could brain chemistry play a role in akrasia? Of course! All human behavior comes down to chemistry, but that doesn't free you of your management responsibilities. Only a very few people have no control whatsoever over their impulses, and most of them are in prison. The fact that you are not in prison or lying in a gutter proves you are able to curb at least some of your self-defeating impulses. Almost anyone will moderate their own behavior when the potential consequences are immediate and hugely painful, so few can claim that their brain is defective and possesses no capacity for self-control. It's great that you're not raping and robbing. Now let's look for techniques to extend that control into more subtle areas where the consequences are delayed.

Should those who "lack akrasia" look down own those exhibit less self-control? Well, every one of us has been there. Each of us has some kind of addiction we are recovering from, so we can sympathize with the drug addict or the morbidly obese. Still, we have to make decisions about where to spend our resources, and the akratic lackers are usually a better investment. We all admire the go-getter more than the can't-doer, and an investment in the go-getter usually yields a better return. Having "sympathy" for someone else's self-imposed disability is not the same as being able to do something about it. We can try to help, but the risk is we end up enabling their addiction instead of curing it. When a person has no belief in their own self-control, almost any strategy from the outside is doomed to failure.

As philosophers have posited for eons, all self-control may be an illusion. Our life may have been preordained since we were born. Still, self-control is the best illusion we have and seems to lead to the best statistical happiness. You can say "fuck it", blame it all on akrasia and quit trying, but you won't experience much life satisfaction. Struggling to overcome your own weakness at least gives you a mission.

Life is the process of trying. I'm not saying you keep throwing yourself against the same brick wall again and again, but you keep approaching the wall from different angles. If something is important, as quitting a destructive addiction obviously is, then you keep hacking away at it, regardless of your failure in previous attempts. Don't repeat the same failed strategies and claim there's no hope. Don't disown your own impulses and say, "These children aren't mine." If a seeming brick wall stands between you an happiness, then you keep testing the wall, looking for weaknesses and pushing your comfort level. If you know it is physically possible, then the only real barrier is inside you and you will breach it if you keep trying.

The alternative, to quit trying, is essentially giving up on life. "I am too weak to tame myself," is the most pathetic lament in the universe and is the equivalent of a living suicide. If you're planning to live and feel good about yourself, then you have to keep hacking away at whatever part of you that is damaging the rest of your community.
Posted by Glenn Campbell at 1:39 PM

This post removed 9/22/2014. Weight loss is a minefield, and I'm not an authority on the matter, so it is best to keep quiet on the topic.
Posted by Glenn Campbell at 5:55 AM