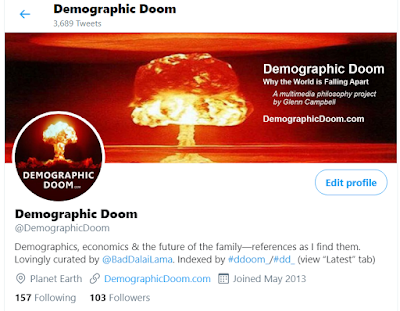 My DemographicDoom Twitter feed is a labor of love, supporting my DemographicDoom project and building a database of references in the core topics that interest me.  This feed consists mainly of a series of article links in the main topics of my project: demography, macroeconomics and the future of the family. The goal of this project is to build a database of information relating to the long-term demographic survival of humanity. The endpoint, as I see it, is to propose a new family structure that will allow the best of humanity to continue.

I have been data collector all of my life, and I hope you are impressed with the elegance and complexity of this system. Here are some random notes on this Twitter "database" and how it works. This page is not frequently updated, and some rules below may be out of date.

The rules above are only the "tip of the iceberg" of all the rules I apply to this account. I rarely write these rules down but just implement them. It's like building a new language from scratch.
Posted by Glenn Campbell at 3:02 AM