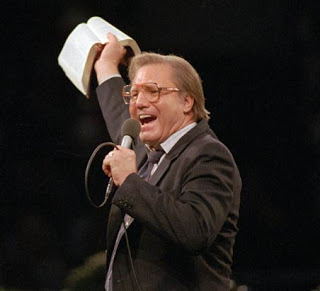 Two days ago, I wrote the treatment for a short film, Inventacon. My exercise this morning is to imagine how it would be expanded into a full-length movie.

My short tells the story of how a naive amateur inventor, Jonathan Hopewell, gets cleverly fleeced by a con artist, Mr. Cloverfield. If this were expanded into a movie, we would have the choice of following the victim or the con artist. Definitely the con artist! He is far more interesting and complex. Cloverfield is the flamboyant head of an evil organization, like Dr. Evil, yet he is also a sympathetic character we are rooting for, like the heroes of Megamind and Thank You For Smoking. This movie is a black comedy where the hero is the bad guy!

My short would be the opening scene, with the movie continuing from there. Everyone on Cloverfield's team lines up for their pay (in cash), and we start to learn about the real dynamic behind their charade.

The most surprising thing we learn is that in spite of being a con artist, Cloverfield truly cares about the people who work for him! The Professor, the Receptionist, the sketch artist Emma, the financial clerk David and all the extras in the R+D room are not just Cloverfield's employees but his friends. They are loyal to him because he takes good care of them. He shares his profits generously and he never cheats them. He is a good manager who acknowledges the feelings and needs of everyone on his team while not shying away from the hard decisions about doing what is best for the whole organization. Cloverfield proves there can be honor among thieves!

("Honor Among Thieves" could be the working title of the movie, but it is NOT the final title. I have a MUCH BETTER TITLE in mind, but it is such a fantastic and culturally relevant one that I dare not reveal it here.)

The movie explores what I call the "inside-outside" phenomenon: how people can be completely loyal and honorable within their family or tribe but exploitative and immoral to anyone outside it. Cloverfield himself is the perfect illustration. If you aren't part of his team, then you're a "mark" and he is utterly ruthless and sociopathic in exploiting you. A funny thing about him is that the same sage motivational talk he uses to energize his team he also uses to fleece his marks. He talks a lot about personal responsibility and taking charge of your own life, which he uses on his victims to lure them into his web. When he uses similar motivating words on his team, he truly cares about them and wants the best for them.

Inventacon, the fake invention company, is only the first in an escalating series outrageous consumer scams we see Cloverfield pull off. He is smart enough to know that each operation has a limited shelf life before consumers and regulators catch on. Immediately after paying off his associates for the Hopewell scam, he announces that he is pulling the plug on Inventacon. Inventacon declares bankruptcy, as Cloverfield routinely does for all of his business ventures. Then he and his team skip town and start a new scam business elsewhere.

After Inventacon, Cloverfield moves into late-night infomercials and a series of ever-bolder consumer scams. He starts by creating a psychic hotline, then he opens a dubious for-profit university promising students lucrative careers in movies and the arts. He also invents and hawks dubious consumer products of all kinds. He invents these products himself with very little effort because they don't actually have to work, only seem to work on TV. He dabbles in virtually every telemarketing scam and even appears on some of the ads himself, as a fast-talking character reminiscent of the late Billy Mays. (The fast-talking part is not Cloverfield's normal personality and it only happens when the cameras are rolling.)

The greatest joy and humor of the movie is seeing all of our familiar TV ads being exposed as deliberately crafted frauds. The audience sees not only the final TV ad or infomercial but also the cynical deliberations that went into it. We see an American actress being auditioned and hired to play a Caribbean psychic. We see Cloverfield consulting with his main confident the Professor and a lawyer friend about how to pull this psychic scam off without running afoul of federal regulators. Although, Cloverfield has no empathy for his victims, he is assiduous about obeying the letter of the law wherever there is a chance of getting caught.

The actual psychic advice is written by Emma, the sketch artist, who also designs a computer program to feed it to the telephone workers who handle the calls. Emma turns out to be a multi-talented creative type who draws, writes, designs corporate logos, programs computers and manages websites and social media. She even becomes a TV director for Cloverfield's infomercials. Cloverfield calls her his "secret weapon" and although he invents each scam, he relies on her for the visual and operational design of it. Cloverfield and Emma have a warm father-daughter relationship that is completely honorable in itself. (Maybe she is even his daughter.) Emma is shy, doesn't like to draw attention to herself and would never directly lie to anyone. She just quietly facilitates the lies of others.

Unfortunately for Cloverfield, Emma also has a conscience. Although she likes Cloverfield, is loyal to him and is grateful for the creative opportunities he has given her, she becomes deeply distressed by what they are doing to their victims. Everyone else on the team accepts Cloverfield's rationalizations that they are "helping" the victim by conning him. ("We're teaching them responsibility," says Cloverfield. "If we didn't take their money, someone else would, and not as pleasantly.") Emma begins to see through this facade, is torn by her conflicting loyalties and will eventually be turned against him. This movie is really her story.

In one key scene. Emma returns to the gutted offices of Inventacon to retrieve a sketchbook. There she encounters the shattered inventor Hopewell and experiences his pain firsthand. For the first time, she is forced to directly lie to someone, and it is a wrenching experience for her. This is the turning point for her, bringing her back toward the path of good.

The overarching crisis of the story is that the SEC is on Cloverfield's trail. About a third of the way into the movie, after we have already bonded with Cloverfield and his team, our perspective shifts to the federal investigators trying to shut him down. We learn of the hundreds of victims he has left in his wake in dozens of carefully crafted rackets. To the Feds, Cloverfield is a supervillain. They know he's a scam artist and have the shattered victims to prove it, but he covers his legal tracks so well that he's nearly impossible to prosecute. One problem is the ironclad contract he has his victims sign, which essentially gives him permission to fleece them.

The lead investigator is a woman who makes it her personal crusade to bring Cloverfield down. As Clovefield's scams become more bold and open, she becomes more determined to trick him into making a mistake, even if she has to get personally involved and stretch the rules of investigation.

Meanwhile, buoyed by one telemarketing success after another, Cloverfield moves into the biggest scam of all: He starts his own religion! He is the head of the religion, of course, and he creates a TV show to spread the word. He becomes a sort of hybrid of Jimmy Swaggart, Tony Robbins and L. Ron Hubbard. He appeals to his audience with sermons about responsibility, emotional appeals for donations and a set of nonsense "procedures" you can only get by joining the religion. Of course, the whole process is focused on funneling donations to his bogus church.

The ultimate battle is between the crafty Cloverfield and the investigator. The sequence of events is yet to be worked out, but there will probably be some romantic involvement between the two. The investigator will also make contact with Emma and must convince her to switch sides. She must explain to Emma (and to us) why Cloverfield is evil and must be stopped. Emma reveals that Cloverfield is her father, which make the decision to turn against him all the more difficult.

At the same time, the audience is rooting for Cloverfield. He is so outrageous and flamboyant and his scams are so clever that we don't want to see him shut down!

All of these conflicts seem impossible to resolve. As they build to a head, we want the investigator to win, but we also want Cloverfield and Emma to win. In the final conflict, the investigator will somehow manage to out-scam Cloverfield, but then he out-scams her. 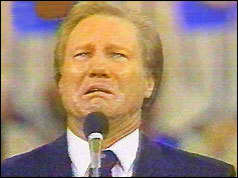 Cloverfield will be stopped, but only partially. Just as the investigators are about to close in on him, he confesses tearfully on his TV show, "I have sinned!" (a direct homage to Jimmy Swaggart). He announces that he will shut down his religion and give back all the donations he has received. He will also terminate all his telemarketing businesses, calling them "crass commercialism". Although he is contrite on the screen and we see tears streaming down his face, we all suspect this is just another scam. By making this bold move on national TV, he has evaded the investigators and avoided jail.

He simply shifts his energies to a new set of victims. He starts fleecing people the traditional and completely legal American way: by selling rich people things they don't need. When we last see him, he works as a high-paid consultant for luxury car makers and other high-end marketers, advising them on how to get more "yield" out of wealthy customers—like adding a 10-cent feature that allows them to double the price of the car. He has evolved from a pure con artist to a legitimate member of society, and because he is fleecing only wealthy people legally, we wish him well!

The investigator loses the final battle, in that Cloverfield doesn't go to jail, but she gets most of what she wanted because she stopped him from preying on the poor and weak. Once she achieves these aims, she resigns her position.

The only person who gets out cleanly is Emma, who cuts all ties with her father and becomes a legitimate artist. We learn, through her, what morality really is and how you can't make a decent life for yourself living in the shadow of someone else's scam.