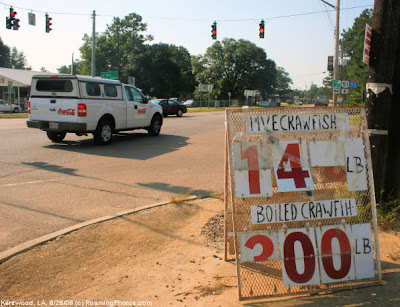 A friend of mine is a professional Britney Spears impersonator (excuse me, "tribute performer"), so while I was driving through Louisiana, I thought it would be amusing to stop in Britney's childhood home town, Kentwood, which my friend has never visited. I expected something tacky but what I found was more touching and meaningful, at least to me. It was like finding the "Rosebud" of Citizen Kane. 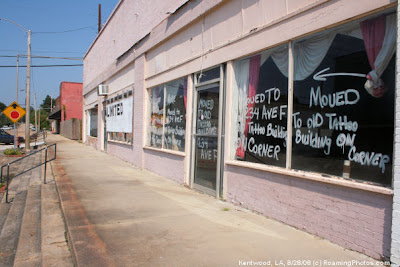 These were very humble beginnings. Kentwood is a fading farming town about an hour and a half north of New Orleans. It is on I-55 close to the border of Mississippi, and the nearest big town is McComb, Mississippi, where Britney was born on Dec. 2, 1981 (wikipedia on Britney). The latest population figure is a little over 2000 souls, which I gather hasn't changed much since Britney's youth. Downtown is now now 90% derelict, sucked dry by the giant Wal-Mart in McComb. Some of the downtown stores don't even have roofs anymore. 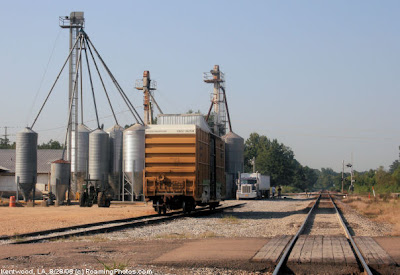 This is a typical farming community in Middle America, more resembling the midwest than Louisiana. There are train tracks running through town and lots of big trucks carrying cattle and logs down the main street. There's a shiny Sonic drive-in restaurant near the freeway, but most other businesses look a little frayed at the edges. The high school is the "Home of the 'Roos" (as in kangaroos) and indeed there is something of an isolated outback feeling here. 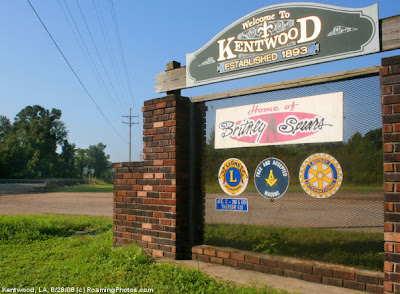 I knew this was the right place because a sign on the north side of town said, "Welcome to Kentwood, Home of Britney Spears." However, there was no other obvious evidence of her presence. It took only about a half hour to explore the main roads of town, then I sat in the car and looked up Kentwood on the web. It turned out there was a community historical museum just a block away, and it had a Britney Spears display! 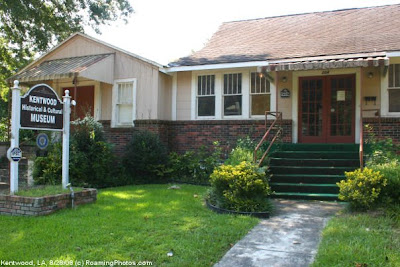 The museum was a former house with about six rooms. Admission was free, and I was the first person to sign the guest book in several days. About half of the floor space was devoted to Kentwood boys who had served in various past wars. The other half was dedicated to Britney. A small elderly woman manned the front desk (apparently the curator). She was dry and humorless at first but warmed up as I talked with her. She said photography was not allowed, so I left my camera at the desk as she gave me a tour.

None of the displays were very polished, and therein lay their charm. The Britney section wasn't what you would expect for a multi-million-dollar star. It was more like what a community might put together if their cheerleading squad had won the state championships.

The curator took me into a room with the lights turned off. She said the darkness was important to get the full effect of what I was about to see. I was confused about which way to face, but she eventually got me oriented correctly, then she plugged a cord into the wall. A miniature stage lit up, and a recording of one of Britney's songs started playing. This was a 6-foot scale model of the stage used in Britney's "Dream within a Dream" tour, as shown on HBO. It was built about 4 years ago by a 30-year-old man in Oregon. It supposedly took him six months. The curator remarked that his wife must have been very tolerant.

We then passed into two rooms of Britney memorabilia--posters, photos, awards, etc.--most of which appeared to be donated by Britney and her family. Several things made an impression on me. One was a full-size reproduction of Britney's bedroom in Kentwood at about the time she first became famous at age 12. It was a small room, perhaps 10x8 feet, behind a plexiglas wall. Of course, it was the clean and tidy room as Britney and her family wanted to have it remembered, maybe not the messy and imperfect room she actually had, but it was still charming. You could think of it as her last symbol of innocence. After that, I suspect, there was little opportunity for childhood.

Another thing that impressed me was a montage of photos from the "Britney Day" celebration that the town held in 1993. In 1992, Britney had been chosen as a cast member in the New Mickey Mouse Club. In the photos at the celebration the next year, she was still very much a child.

I think this was the last and only Britney Day. From that point on, Britney's fame seemed to be more than the town could process. Indeed, I think it was more than Britney herself could process.

Some of the most poignant photos were hidden on a back wall. They were faded original snapshots taken when Britney was very young, just like you would find in someone's living room. The curator didn't seem to know much about Britney's childhood, but when I asked her what Britney's father did in Kentwood, she said she thought he was a contractor making metal buildings.

The curator said that Britney's family still had a house in town, but I didn't ask where. She said family members used to come into the museum frequently but she hadn't seen any of them in the last year.

The whole thing affected me much more than any slick display. What happened here is that an ordinary girl in an ordinary town suddenly became a princess. It's not surprising that there have been some bumps along the road. Making someone a child star is almost a form of child abuse, and very few survive it. Can anyone rocket into the stratosphere like she has and survive?

I got the unexpected feeling, after seeing the Britney section, that I had joined her community. I am not a fan; I just see her as a vulnerable human. My taste for ridiculing her has evaporated, because I see that she was caught up in forces beyond her control. All I want now is for her to be happy.

The curator never asked for any donation or admission charge. The museum has a few products for sale, but I had to ask about them. I was feeling generous at the time and spent about $20. I bought some photos of Britney, some local postcards and a coffee mug of the museum.

I also bought a publicity photo of Taylor Horn, another pop singer who happens to live in Kentwood. Taylor wasn't quite famous yet, but she looked famous in her publicity photos. She looked like she was in her 20s, but the curator said she was only 15.

I suspect that Taylor would like to follow in Britney's footsteps, but I'm not sure that's a good idea. It might be healthier if she takes her time.

Many more photos are available in my Kentwood Photo Album (60 photos). 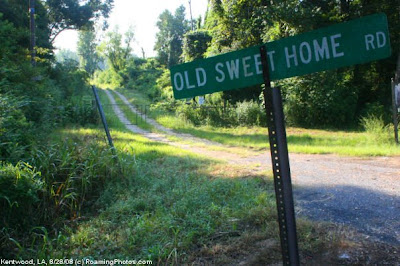 Posted by Glenn Campbell at 8:15 AM