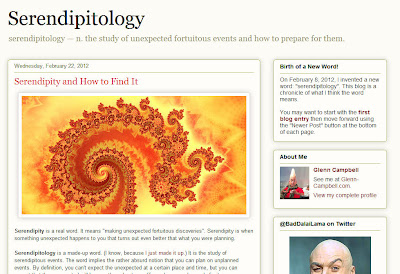 Check out the first major entry in my new blog, "Serendipitology".
This blog tries to define and explore this new word I invented. The philosophical essays therein could have been posted to this KilroyCafe, so I am incorporating them by reference.
The blog has its own website: Serendipitology.com
The first entry is "Serendipity and How to Find It".
Posted by Glenn Campbell at 6:46 PM

In order to write music, you need to have a theory about what music is. Since I dabble in songwriting, I have my own theory, and here it is....
[I may add more observations to this list as I think of them.]
Posted by Glenn Campbell at 7:26 AM