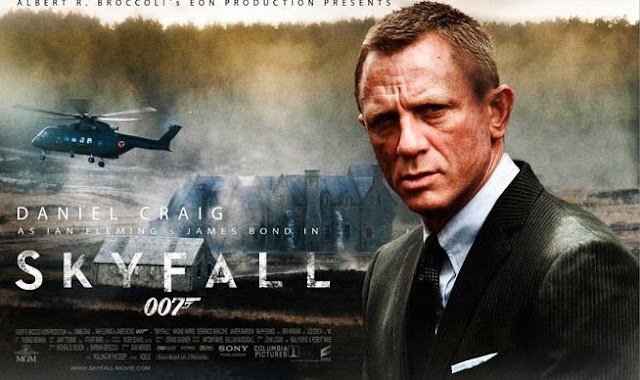 I saw Skyfall last night. Instead of giving it stars or telling you whether you should see it, I want to describe how this movie is different from the other Bond films and what it means in the evolution of movie making.

First, here is what has NOT changed: the preposterous plot, the physically impossible chase scenes, the impossibly beautiful Bond girls, the explosions, the exotic (and clearly photoshopped) locations around the globe, the world-threatening evil genius villain in his secret island lair, the high body count, the endless henchmen with no fear whatsoever (No matter how many of them you kill, the others never lose their nerve.), the thousands of bullets fired, all of which happen to miss Bond and the primary characters except when critical to the story. And, of course, the villain captures Bond, shows him his lair, reveals his diabolical plan BUT DOESN'T KILL BOND WHEN HE HAS THE CHANCE.

The really amazing thing is that none of this matters. It's still a riveting movie that held me for nearly two and a half hours—and I want to see it again!

Skyfall works because the filmmakers have finally discovered the magic formula that resonates with the audience. It's not the special effects that make the movie but the human story at the center of it. Frankly, it's a story repeated in hundreds of other movies in recent years; yet I and the rest of the audience never seem to get enough of it. It is the story of the flawed hero and how he overcomes his own weaknesses.

The formula works because it is the story of all of us. We are all flawed characters and we know it. We are trapped in our own weaknesses, and seeing another character overcome his gives us power. It is the struggle we all must go through if we hope to overcome our own demons. Seeing a movie character do it makes us thinks we have hope ourselves.

The critical difference between this Bond film and the 22 that went before—even the Daniel Craig ones—is the filmmakers of this big budget franchise have finally learned to give their hero flaws. This bond is an alcoholic and drug abuser. He fails every qualification test the Ministry of Defense throws at him. Bond and the audience are repeatedly reminded that he's a washed up has-been. This is SO critical to the story, because now the hero's main opponent is himself. Sure there's a villain, but he is mainly a device to give the hero a chance to prove himself. The hero will defeat the villain only by rethinking the problem and taking control of his own situation.

Commercial movie making has been around for a century now, but the notion of a flawed hero is a relatively recent technological innovation. In the beginning, the good guys wore white hats and the bad guys wore black, and there was no real attempt to explain either one. It took the better part of a century for the business to come around to the notion that the flaws make the character. It's not enough for the hero to be good; he has to be battling with the dark side. It's not enough for the villain to be bad; we have to have some sympathy for him and some understanding for how he went bad.

Novelists, screenwriters and directors may have always known this. Flawed movie heroes have been around for decades, but you usually had the sense that the moneymaking side of the business was never quite on board. The bigger the budget got, the blander the hero, as if the money side of the business didn't want to take the risk of letting the hero show his weakness.

This was certainly true of the Bond films, where the hero was always larger than life. He took his martini shaken not stirred yet never had to struggle with alcoholism. We look back on these movies and see them as cartoons, which was apparently what the audience wanted at the time. Part of what has changed now is the audience. It, too, has evolved. It is more willing now to pay money to explore the darker nature of life, so long as the hero still wins in the end. Skyfall released in the 1960s would have probably been just too dark. You mean Bond isn't the perfect Cold War hero? It would have left audiences scratching their heads.

Now everyone seems to be on board with character dysfunction: the filmmakers, the audience, the money. The hero has to have flaws. He has to be battling himself. We still expect a semi-saccharine ending where the good guys win at least the major battle, but getting there can be a lot more messy, like life itself.

Even the villain now has flaws—defects in his evilness. Part of the joy of Skyfall is watching the sympathetic quirks of Javiar Bardem. He's not a cartoon villain with an eye patch stroking a kitty. He's got depth and a healthy dose of comic irony. His evilness is so much more intriguing when we know why he went bad and can almost sympathize with him. For sure, he is capable of superhuman things when pursuing the hero, but at the core he is just another tortured Bond who took a different path.

The fact that Bond now has flaws does not turn us away from him. On the contrary, it makes us care! Once we become attached to the hero, then we are willing to accept all the absurdities of the rest of the story. We know we're on an amusement park ride and have a pretty good sense of how the story is going to unfold, but the formula doesn't matter. We still enjoy the ride. Once we care about Bond and see him as a reflection of our own flawed selves, then we are willing to sit still for the rest of the manipulation.

The filmmakers also deserve credit for turning every Bond cliche on its head. Everyone knows the Bond formula, so it's a pleasure to see it twisted around at every turn. Yes, the villain has his own private island, but its not the one you would expect. I want to see the movie again just to drink in all the subtleties and inside jokes.

It's not much of a spoiler to tell you what is going to happen. After a series of expanding disasters, it is going to seem like the villain holds all the cards. Catastrophe and bad luck pile up against the hero until it seems there is no way out. The villain has nearly won, and the good guy is doomed. Then the good guy finds some inner strength he didn't know he had. He chooses to take control of the situation, power over his own flaws and move the playing field to his own turf. Then there's an epic final battle. Henchmen are killed off until there's just the good guy and the bad guy. The good guy uses his last ounce of hidden strength to personally put a dagger in the bad guy's heart. Loose ends are wrapped up. The End.

That's the plot. It's always the plot. It doesn't matter how many times it is repeated; as long as we care about the hero and see him as a flawed stand-in for ourselves, we'll make the journey with him. The secret for the filmmakers is they have to take the time to establish this relationship. The explosions and final battle wouldn't be as exciting if we hadn't seen Bond fail all his tests at MoD.

It's all absurd, of course. An amusement park thrill ride. I usually don't go in for these things if they are just going to twist me around on a predictable path. But give me a character I care about, loaded with realistic flaws I can identify with, and I'll gladly shell out 9 bucks for the ride. Maybe even take it again.

Posted by Glenn Campbell at 2:30 AM