I am now a published author—in Turkish! 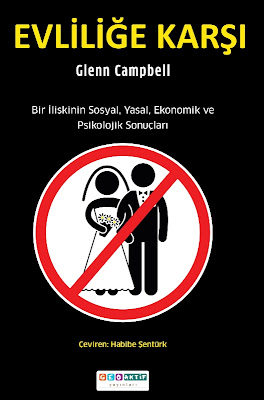 After a lifetime of compulsive writing, I am finally a published author! The book is in TURKISH mind you, but it has actually been published (as of this week) and I am actually getting paid! Here is the publisher's catalog entry (and the English translation via Google). Of all the famous English-language authors, how many have had their first book published in Turkish? Not many. Not Stephen King, Charles Dickens or Oscar Wilde. In fact, pretty close to none of 'em I'll wager!

The new book, released this week, is EVLİLİĞE KARŞI: Bir İlişkinin Sosyal, Yasal, Ekonomik ve Psikolojik Sonuçları. That translates into "Against Marriage: Social, Legal, Economic and Psychological Effects of a Relationship". It is a translation of my online book "The Case Against Marriage", adding a few of my marriage-related essays from Kilroy Cafe and elsewhere. (Don't look for my online book on my own website. I have removed it so as to not taint the market.)

Here is a new interview with my publisher (12/22) which gives you an idea what the book is about. Also see information  on the forthcoming English edition: The Case Against Marriage.

Previously, my only "book" was the Area 51 Viewer's Guide from the 1990s, which is now available free online. It sold a respectable few thousand copies (perhaps as many as 10,000, but I lost track), but it doesn't really count as a published book because I did it myself. (It was a looseleaf document of 110 pages with no ISBN, so it never entered the stream of "real" books.)

The publisher of the new book is GeoActif in Istanbul. I met my publisher and translator on a visit to Istanbul a few weeks ago (photos). The publisher stumbled upon my work online about six months ago and felt it would be appropriate for a Turkish audience, where marriage is even more of a hot-button topic. In America, we can get married and unmarried relatively easily—and talk about it freely—but in Turkey even the idea of remaining single is quite radical. I can see this book could be quite subversive. (Hopefully not to the same extent as Salman Rushdie's work.) Even the cover (above) is bound to get attention!

(For the record, I know only two words of Turkish: "süt" for milk and "ayran" for liquid yogurt. I learned these words on a previous visit to Istanbul by pouring ayran on my cereal. photo)

An English-language version is in the works, presumably called The Case Against Marriage. I'll be much more active in this edition and will take part in the editing and possible rewrites over the next month or two. That edition will be published in Turkey but should be available in the USA via Amazon.

Publishing in Turkey may seem an odd start to ones publishing career, but I see great advantages in it. I'll have a lot more creative input into the English edition than I would with an American publisher. Sure, Americans have more resources, but there is also more competition and more layers of bureaucracy between me and the printed word. If the book is truly compelling and subversive, then seeding a few forbidden copies around the world could be just the right marketing strategy.

Until the English edition comes out, my only advice to you single non-Turkish speakers is DON'T GET MARRIED JUST YET! (Either that or learn Turkish fast!)

This is how the book looks in mass quantities... 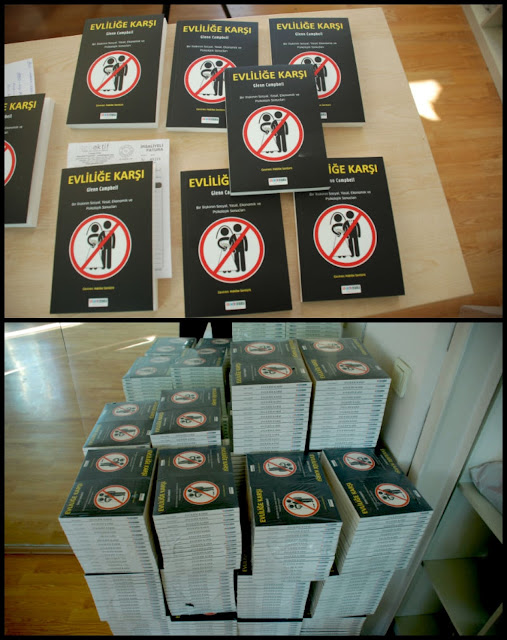 Posted by Glenn Campbell at 1:17 PM