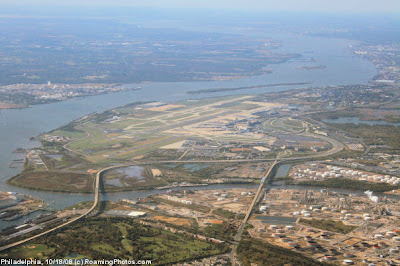 A useful airport in a boring city.

Positive attributes: (1) Reasonably priced food (supposedly "mall pricing"); (2) terminal is open all night, so you can sleep there; (3) close to the city.

Negative attributes: (1) No free wifi. (2) There is little to do in Philadelphia itself.

Location: Only about 8 miles from downtown Philadelphia. The downtown skyline is clearly visible.

Layout: Terminals are lettered A through F. All terminals except F are connected within security. (F is the commuter terminal and requires a shuttle bus ride or a walk outside security.) Terminal A actually consists of two widely separated terminals for the low- and high-numbered gates. (Apparently, the airport didn't want to disrupt their lettering system when a new terminal was built.) Most international flights are in the A-high terminal.

Local Transportation: The commuter rail station is directly adjacent to the airport terminal--like airports in Europe. Unfortunately, the fare is very high given the short distance traveled (about $8-10). There is also a local bus running to the nearest subway station, which will get you to downtown (slowly) for less than half the price.

Near-Airport Attractions: There is a wildlife refuge across the highway from the terminal. If you had a few hours to kill, you could wander around on the trail system there. (To get there on foot, go out to the curb and turn right. Pass the taxi waiting area and keep going. You'll eventually get to an underpass under the highway. After that, you're on your own.)

For a good view of the city, go to the top of the main parking garage.

There are no commercial services or stores within walking distance of the airport.

Food: Lots of options, reasonably priced. There's a food court between B and C gates. Supposedly "street pricing" is enforced. Prices will probably still be higher than on your street, but it is a welcomed relief from the astronomical prices at other airports.

Sleeping: You can get away with sleeping within the secure terminal area, since it is open all night. Most of the bench seats in the airport have armrests (so you can't lie down), but many of those in the "C" concourse do not, which makes "C" the best sleeping area. (An airport employee woke me up, not not kick me out, but to give me a pillow and blanket.) See my Red-Eye Survival Guide for tips on sleeping in airports.

WiFi: Free WiFi on weekends only (confirmed 11/08, use "attwi'). On weekdays, AT&T offers wifi at $8/day (or free was various preexisting accounts).

International Travelers: Philadelphia is a credible alternative to New York or other eastern cities as a port of entry. Customs seems relatively fast. If you rent a car, Philadelphia is in a nice central location with easy access to both New York and Washington.

Philadelphia: Skip the city itself. One of the least interesting downtowns in America. Go to New York or Washington instead. You would only go downtown if you have an abiding interest in the American Revolution or the Rocky movies.
Posted by Glenn Campbell at 10:12 PM