My Life Disrupted by 'Slumdog Millionaire' 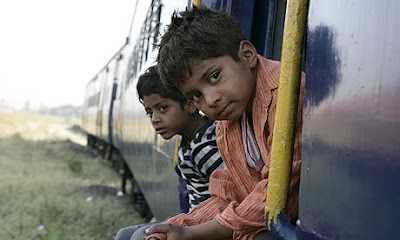 Yesterday, I went to the multiplex, paid for one movie and saw two. Apart from the satisfaction of screwing the system, this technique gives me the chance to see movies I wouldn't normally see, that I probably wouldn't have the courage to step into otherwise. The second movie is free, so what the heck. But of course it's the second one that usually changes my life.

Yesterday, Movie #1 was Quantum of Solace. Intellectually, it was a quantum of nothingness, but I managed to sit through it anyway -- unusual for me, being that I can't even tolerate a half-hour TV show anymore.

Bond was up to his old meaningless antics of car chases, fistfights, implausible escapes, flippant deaths and gratuitous explosions. What made the product go down easily was the gritty documentary reality it was packaged in. Bond hit the usual European glamor spots but also the Latin American slums. The editing was rapid and visceral and made you feel like you were really there. You could hardly detect the CG graphics or the gazillion dollars it cost to make.

Movie #2 was Slumdog Millionaire, a fairly conventional and implausible boy-meets-girl story set in a startling location: the slums of Bombay. This is the one that kept me awake all night.

In Slumdog, a boy from the rougher side of the city defies the odds and wins the Indian version of "Who Wants to be a Millionaire." Of course, he also wins the impossibly beautiful and virtuous girl in the end.

Movie #1 was a conventional Hollywood product flavored with a layer of dirty reality. Movie #2 was dirty reality sugar-coated with a conventional Hollywood product. In Slumdog, the relative predictability of the script and the frequent references to Americanized culture allow a truly horrifying reality to seep in. Those slums and the countless lives tragically wasted there are REAL.

Yeah, it's a movie, but this reality wasn't created on a sound stage. They just opened the doors of Bollywood, turned the cameras around and started filming the neighborhoods nearby. Unemployed? You ain't seen unemployment, Baby! Poverty? Dickens' characters had it posh! India wrote the book on human degradation, but it takes exceptional circumstances to bring that reality into the American consciousness.

Intensity-averse wuss that I am, I wanted to turn away. I wanted to walk out of the theater, but the script kept lapsing back into farce, reminding me "It's only a movie," and holding me down in my chair.

The young protagonist is sitting on the high-tech set of a glossy TV show recalling his horribly low-tech childhood. It's the hokey but familiar setting of the TV show that keeps us anchored in reality -- that is, in OUR reality, which is an artificial creation in itself.

Slumdog owes a lot to Salaam, Bombay, Mira Nair's 1988 film that first brought us the slums of Mumbai and the orphans surviving there. Slumdog is even more effective because it mixes the two worlds and gives us frequent familiar references to our own culture. No longer is this a tragedy of a land far, far away but only a few feet from the call center worker you talked to yesterday.

But the movie I most associate with Slumdog is The Matrix. It's like we've taken the red pill and are finally seeing the reality that was there all along, behind our own false computer-generated one. It's an ugly, offensive reality, but it is what it is, and you don't make it go away by pretending it isn't there or, as American's usually do, by trying to buy it off.

As many American references as there are in Slumdog, the protagonist has only one brief encounter with real Americans. The scene is played as farce but captures our culture perfectly. An American couple, driving an expensive car, want to see the "real" India, so the boy shows them the slums. While they are away from the car for a few minutes, local hoodlums totally strip it, leaving only the shell. When the boy and the couple return, the boy is blamed, and a policeman starts beating him for it.

The couple recognize the boy's innocence and are offended by the open injustice of the beating. Insurance will cover the car, and they remedy the injustice to the boy in the American way: by giving him a hundred dollar bill. They have now paid off reality and can go back to their comfortable suburban matrix.

I wish it were that easy for me.
Posted by Glenn Campbell at 9:31 AM