The Recession is Over! (So Says I) 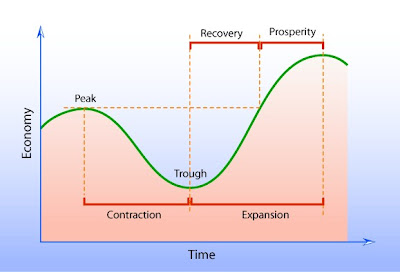 The Recession is over! That's my assessment. I'm no economist, just an amateur soothsayer who happens to have lived through several of these things.

Upon what do I base my analysis? A single statistic: In November, the US economy lost almost no jobs. (Just a statistically insignificant 11,000 jobs instead of a predicted 130,000. See news story.)

This is in spite of the fact that that layoffs seem to be everywhere. Many local and state governments, for example, are only now laying off workers as their budgets reach the breaking point. I see these as lagging indicators, however. Government layoffs are a reflection of how the economy has been over the past year or two. Business layoffs, on the other hand, tend to be more pro-active, reflecting present and anticipated conditions.

If government layoffs are still happening, but the total job numbers remain steady, that implies that somebody out there is hiring enough workers to compensate. It can only be business doing the hiring, and it would do so only if sales are actually picking up.

Saying that the recession is over does not mean the pain is over. Big sectors of the economy are hurting and will continue to hurt for years. Governments continue to be in dire straits. New workers being hired now might be getting only a fraction of their former wage. Some industries will never recover, but this is mainly because their time has come and gone.

All that matters when defining the beginning and end of a recession is the current growth of the economy as a whole. Somebody out there is engaged in economic activity, and it's apparently enough to bring up the numbers. Maybe the good times we knew will never be back, but "recovery" is defined only by growth relative to the trough.

The world took a massive hit from the housing collapse, but the economy as a whole may have already discounted that. One should never underestimate the ability of U.S. Capitalism to roll with the punches. What emerges from the ashes is a new, different economy, based on different assumptions and probably much lower expectations. Some individuals, industries, cities and countries based on the old assumptions will continue to founder (Las Vegas, Dubai), but wily new operators will take their place as the leaders of growth.

Oh, in addition to the job numbers, I have one other indicator that the recession is over: Glenn Beck and others in conservative media are urging people to buy gold! I remember gold fever in the past, and every time it happens—every time the average sucker is talking about it at dinner parties—gold prices collapse. When stupid white people start buying gold, they're investing in the recession. It's the reverse hysteria of the boom years: Gold can't rise forever any more than housing prices can.

Sooner or later the economy is going to factor in all the excesses of the past, and growth is going to resume along a different track. Then everyone is going to want to be out of gold and into the market. Glenn Beck's groupies will take a bath, just like the conspiracy believers in every past recession.

Greed will be back, you'll see!

NOTE: I don't necessarily believe one aspect of the graph above: that the next peak in the economy will be bigger than the last. (That would be a big bubble to blow!) I only believe that the trough has been reached.
Posted by Glenn Campbell at 4:40 PM