Men and Women: Different but the Same 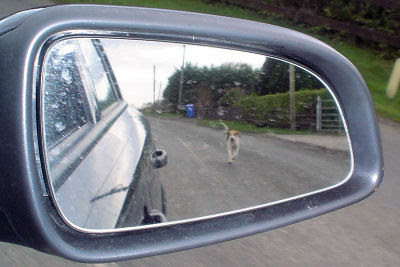 [This is a guess piece I wrote for another blog, Miss Model Behavior. Original location]

Hi! Kilroy here, from Las Vegas. In spite of my unfortunate gender, which is admittedly not female, Miss Model Behavior has been kind enough to let me write a guest piece for this blog. Perhaps I can offer an opposing-party perspective on the mating game.

First off, I want to sincerely apologize for the atrocious behavior of my brethren. We're rogues and scoundrels, and frankly I wouldn't trust any of us. On the other hand, there is some individual variation between males, and I wouldn't want to be judged based solely on my gender. Yes, men and women are statistically different, based on our different evolutionary agendas, but the closer you look at us the more you see we are really the same. Deep down, we all just want meaning, self-esteem and tenderness in our lives.

Our differences are programmed by biology and have to do with the fact that women have only a handful of reproductive opportunities in their lifetime while men have a gazillion. Both men and women have a reproductive stake in long-term bonding because this is the only way to assure the survival of our slow-maturing and resource-intensive offspring. The male, however, also has the alternate strategy of sowing his wild oats far and wide without bothering with the consequences – raping and pillaging as it were. If he loves 'em and leaves 'em, there's still a decent chance his spawn will reach maturity, so if an opportunity arises, the male and his genes lose nothing by giving it a shot.

Females, on the other hand, have every evolutionary incentive to be choosy. They want their man to prove himself, bring them gifts and jump through some flaming hoops to demonstrate both his fidelity and his ability to provide. Women must be fickle and perhaps a little trigger-happy to avoid admitting a low-quality sperm donor who can't go the distance.

None of us are imprisoned by our biology, especially in the age of contraception, but it certainly effects our emotions. These differences, of course, lead to misunderstandings. The male doesn't comprehend why he should have to jump through hoops for what seems to him the uncomplicated pleasure of sex. If the lady is physically "hot" (i.e prime for reproduction), he's probably going to want to bed her, no questions asked. The female has a much broader and more nebulous notion of hotness which is linked to more than just appearance.

The delusion of both men and women is to think that the other exists "for me" to an extent that isn't really possible. Women repeatedly ask, "Why are men such assholes?" while men ask the same about women. The core problem is unrealistic expectations on both sides. We are all basically narcissists, or at least we start out that way. We'll jump through whatever hoops are necessary to get the relationship started, but that doesn't mean we have attained the maturity to sustain it in the long term.

When I watch men try to pick up women, it reminds me of dogs chasing cars. Dogs chase cars because that's what they're programmed to do, but this doesn't mean they know what to do with the car once they've caught it. Frankly, women aren't much different: They'll be choosy and set up hoops for the man to jump through, but once the conditions are met and they have him in their arms, what do they do next? Both men and women are generally clueless at that point.

This is where men and women become the same. Once you have sex out of the way, how do two essentially genderless minds get along with each other in close quarters? This is really an existential problem rather than a gender issue. Gay couples face the same challenge and are no more successful in resolving it. Only in romantic relationships do you get so close and are expected to share so much. Romance dissolves the standard physical, emotional and economic boundaries between individuals, but what new boundaries are you going to replace them with?

In the morning after your first night together, you have to come up with a whole new regulatory system, which most people just aren't prepared for. If you are lucky, you might have seen your parents interact successfully over an extended period, but for the most part it's a brave new world for all of us. Now that we've merged our bodily fluids and are crying on each other's shoulder, how do we define the differences between me and you? How do we make effective use of each other and avoid stepping on each other's toes? Sex is nice at first, but it's going to get routine really fast. How do we justify our relationship on other terms?

In other words, what do you do with the car after you've caught it?

Sadly, the most common way to justify a relationship is to create unnecessary drama within it. Once sex has been thoroughly explored and the relationship starts feeling routine, that's when one party or the other is likely to concoct a conflict. This could be someone going out and having an affair or just staying home and starting to complain. This isn't usually a conscious process, but in an emotional way the person is thinking, "Things are getting boring and meaningless here, so I've got to shake them up." Once stability is disrupted, then at least you have something to fight about and the relationship appears to have substance again.

You can visit Kilroy's blog at KilroyCafe.blogspot.com

Posted by Glenn Campbell at 6:28 PM