It is not usually the place of this blog to comment on contemporary politics, which is more than adequately covered elsewhere, but this "Sarah Palin" person is a national treasure. Any relationship to Michael Palin of Monty Python?

Above is the "Sarah Palin meets Hillary Clinton" video that half the U.S. population has already seen (in case you are among the other half). Obviously, Palin is God's gift to comedians.

Here is another widely-distributed item: A letter about Palin by a Wasilla resident (referred to me by an L.A. Times article).

I'll even stoop to embedding another YouTube video (below) -- a hip-hop tribute to Palin provided by a reader (although I'm still not budging from my position that YouTube is useless).

Clearly, the comic possibilities are endless! 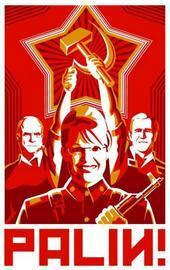 Posted by Glenn Campbell at 4:26 AM