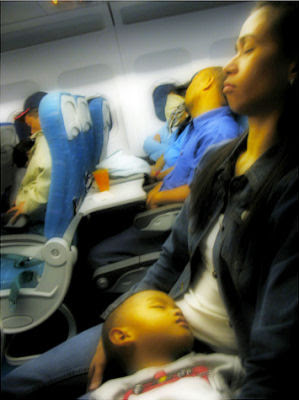 For most people, one of the most difficult things about visiting a different continent (or just crossing one continent) is the grueling flight there. Crossing an ocean typically involves sleeping, or attempting to sleep, while sitting upright in cramped quarters. As a very frequent flyer, I do this often, and through experience I have learned how to make it relatively painless.

The ultimate goal of overnight travel is to sleep from the moment you hit the seat to the moment the aircraft pulls into the destination gate. This would make the flight an exercise in instantaneous travel: Go to sleep in New York, wake up in Paris. This goal may not be achievable in the real world, but I have gotten pretty close. Doing it requires both preparation and acclimation. The more you fly, the better you will get at it.

Here are my suggestions: 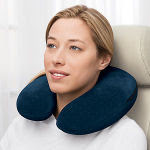 In practice, if I decide I’m going to sleep on a flight, I start working on it from the moment I hit the seat. I take off my shoes, close the window shade, install my earplugs, hat, mask, optional neck pillow and blanket, fasten the seatbelt loosely where the flight attendants can see it, then I try to tune out everything. As soon as I feel the plane leave the runway, I recline my seat. I ignore all announcements and in-flight services, including food and beverages. My sole objective is to sleep, and if I am successful, I won’t have any contact with the outside world until the flight attendant taps me on my shoulder before landing and tells me to return the seat to upright.

Sleeping upright is just something you have to get used to. It can never be as easy or restful as sleeping lying down, but the more you do it, the easier it gets. The main problem is that your legs swell up and can become uncomfortable, sometimes for days after the flight.