Below is a reformatted version of my Tweet Essay started on the morning of Joe Biden's 😎⁴⁶ Inauguaration (20 January 2021). Begun before dawn in Key West and continued as Biden was sworn in. See Index of All My Tweet Essays

Red ➤ indicates later tweet inserts out of its original order.

And then we’ll find that “normal” isn’t normal anymore. No economy, market or monetary system is sustainable. All the Ponzi schemes will start collapsing, and the bills will be coming due.🧵⇩

➤ 😎 This is a terrible time to be a responsible president. There are no “solutions” to anything, only costly no-win mechanisms to delay the inevitable. 🙁

A #PonziScheme ▲ is a false investment where early investors are paid off by later ones. All these schemes collapse eventually—but when?

In this 🧵 I will try to inventory some of them...

➤ 🔊 In my latest podcast #DDpc52, I discuss the general mechanism of "overpromises", or selling more chickens than you produce 🐓 http://youtu.be/RiO0MadMlo0

If you sell more future 🐓s than you can deliver, eventually someone gets stiffed, and in this case "someone"="everyone". ✂️↓ 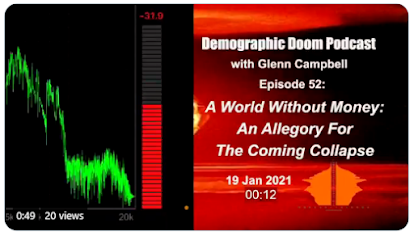 ▲ The Ponzi schemes and overpromises range far and wide in the current economy.
In fact, it's hard to find any corner of the economy that 𝙞𝙨𝙣'𝙩 infected by a ▲ scheme. They're interrelated and one often 🩸s into another.
Here are the main ▲s I've identified. 🧵⇩
▲№1⸻Stocks
A stock is the promise of a 🍕 of the future profits of a company. As of now, US markets are at ALL-TIME HIGHS despite a 🦠 that has devastated the real economy. Pure🦇💩🤪!
Argue about "why" all you want. US stocks are in a massive 🎈 and have to 💣💥 eventually.
▲№1.1⸻Stocks⸻Exhibit "A"
Can making money be as easy as this couple suggests? 📺⇩
Just buy low sell high. Reminds me of the advice every shoeshine boy had in 1929. Get in now or you're gonna miss out!  🎉🥳💃
🤦 Source: https://tiktok.com/@chadandjenny?lang=en 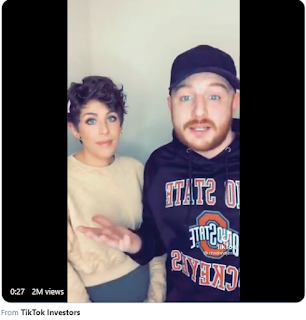 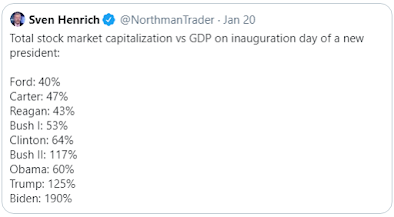 ▲№2⸻US Government Debt
In 2020, 2021 & maybe beyond, the US Gov't is spending ~2x what it collects in taxes. Even in pre-🦠 "good times" of 2019, it was 💰📤 >25% more than 💰📥. The rest is borrowed and can never, ever, EVER be repaid or even paid down. It only GROWS. 👹
▲№2.1
The US Gov't can 𝙣𝙚𝙫𝙚𝙧 again balance its budget because—
① Demographics: Too many costly 👴👵. Not enough active 👷👨‍🍳🧑‍🚒🧑‍🏭 paying taxes. Few 👶s in pipeline.
② Politics: Balancing the budget would mean cuts to "essential" programs that voters wouldn't accept.
▲№2.2
The budget was balanced 1998-2001 only because the #BabyBoomers were at the peak of their earning power. Now they're 👴👵🦽 and draining gov't resources.
The happy #DemographicDividend of many taxpaying 👷️👨‍🍳🧑‍🚒🧑‍🏭 and few taxdraining 👴👵 will never again be repeated.
▲№2.3
Technically, the US Gov't can never "default" on its debt because it can print more 💵s, but that's not a real solution. It only screws up the rest of the economy—and the gov't itself—in ways we're only beginning to understand.
🤔Inflation? Yes, but it's a twisted road.
▲№2.4
Bottom Line ധ____
If you buy a 10-year Gov't bond today (at ~1%) it won't be worth what you think it will upon maturity. Either through inflation or default, this paper will not return full value. Once the market assimilates this, all hell will break loose.
▲№2.5
All it would take to bring down the government would be a modest rise in bond rates to their historical norm of 5%. The gov't couldn't pay even the interest costs.
The #FederalReserve avoids this by holding rates low and printing new money to buy bonds—which leads to...
▲№3⸻Currency Bubble
In any 🍌 republic, printing as much 💵s as the Fed has would lead to rampant consumer inflation. The fact that it hasn't so far should not be reassuring.
Something will go bad. It has to. No government can print new money indefinitely to pay its bills.
▲№3.1
I'm not gonna go down the 🐇🕳️ of #MMT. That's 🤪-talk.
If unlimited 💵 printing were possible, you have to ask, "Why pay taxes at all?"
⚙️⚡ There is 𝗻𝗼 𝗳𝗿𝗲𝗲 𝗲𝗻𝗲𝗿𝗴𝘆. Every #PerpetualMotionMachine has its fatal flaw, and it will be known soon enough.
▲№4⸻Residential Real Estate
As of this writing, commercial real estate is taking a bath but 🏠s, like stocks, are flying high.
Commercial 📉 reason: 🏠-bound workers during 🦠 don't need offices.
Residential 📈 reason: 🤷
Won't go on forever. Something has to break.
➤ Re: ▲№4
Chart shows 🤪 surge in 🏠 prices since mid-2020.
🕺🏻 #dd_realestate #dd_graph #dd_CrashLunacy 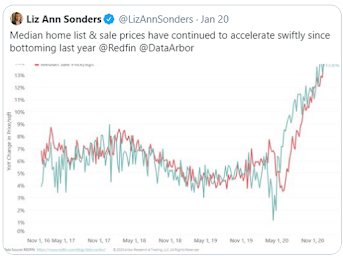 ▲№5⸻Infrastructure Bomb
Build it and they will come⸺
and come
and come,
until whatever you built wears out and needs to be repaired.
Lots of those projects are coming due, and if the work isn't done soon, stuff will start falling down. 🌉s collapse. 🛣️s turn to rubble.
▲№5.1
Infrastructure is easy to skimp on because it can always be put off. Roads only 𝘨𝘳𝘢𝘥𝘶𝘢𝘭𝘭𝘺 deteriorate until something really bad happens.
Local gov'ts don't have the 💰 for repairs, so the Feds must step in, using—you guessed it—borrowed money. (See ▲№2)
▲№5.2
The single-family suburbs are a special kind of infrastructure 🔥𝖍𝖊𝖑𝖑🔥 because their streets and sewer lines are long relative to tax revenues.
New subdivisions <20 years old are all gravy. Older ones—like 👴👵—are a net drain on local government resources.
▲№6⸻Urban Flight
Many workers who have been freed of a fixed office by the 🦠 are fleeing Big💰 cities like NYC, LA, SFO, Chicago for lower cost ones, leaving them in dire straits.
Local gov'ts can't print 💵 like the Fed, while raising taxes just ⇧s the 🛫. No way out!
▲№6.1
Premiere cities are facing a #dd_DoomLoop: The more people move out, the worse life gets, encouraging more to flee. (This may not 🔲 with ▲№4 yet, but it will.)
These cities have huge debts, which will become unpayable as tax base shrinks. They'll need Fed bailouts...
▲№6.2
…with borrowed money, of course, and the urban decline will be chronic.
Even if the 🦠😷 ends tomorrow, the damage is done. Freed now to "phone it in", few knowledge workers need a Manhattan apartment anymore🏙️
Or a California pad🏖️ Who needs it? You can always visit.
▲№7⸻Wealth Inequality
More a ⏳💣 than a ▲ scheme. In the computer era, efficiencies of scale have made the rich richer and poor poorer.
e.g. Once there were 1000s of inefficient but profitable 🚖co's. Now there's hyperefficient Uber/Lyft. Only execs make money. ...
▲№7.1
The 🦠 has widened the wealth gap. 1000s of small businesses have been wiped out while many big ones have thrived. Jobs are still available from the big guys, but they are mostly low-paying "fulfillment" positions—like Uber/Lyft drivers, fast food, etc—with few benefits.
▲№7.2
As of now, jobs are available everywhere in USA! I see it as a traveler. 𝙀𝙫𝙚𝙧𝙮 fast food restaurant, everywhere in 🇺🇸, has Help Wanted signs—but these are unhappy jobs to those who have built their lives on a higher wage. A whole nation can't live like this. 🍔🤮
▲№7.3
Unhappy workers are bad for society.
They get 🤬.
They cause unrest.
They vote for populist charlatans.
Perilous to democracy is a populace whose personal lives are consistently getting worse.
Workers are another form of infrastructure we're not adequately maintaining.
➤ Also see my related Tweet Essay:
⦕  The Big One  ⦖
on the coming economic collapse.🧵⇩
Master Index of Tweet Essays: http://philosophy.baddalailama.com/2021/01/tweetessays.html 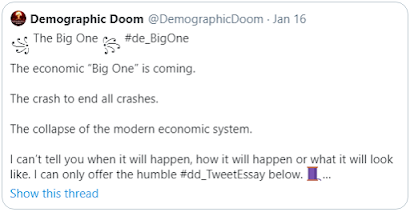