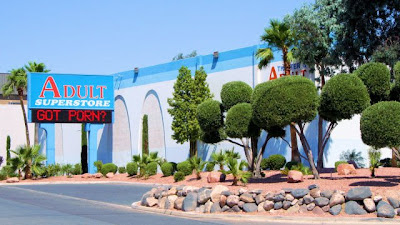 We asked the nice clerk if they had anything remotely "soft-core", and he replied politely, "Everything here is pretty hard-core."

So if this is a "superstore" presumably offering what the customers want, what does this say about the overwhelmingly male clientel? They are pretty, um, hardware oriented, wanting to see pure genital interaction with virtually no emotional engagement.

Men can be so mechanical! For a certain kind of autistic male (which could be 50% of the male population), even real romantic relationships boil down to hardware: what kind of body she has and how it can be consumed. Consumption of the body involves having sex with it. You keep track of the bodies you have sex with, sort of like plane spotters keeping track of the tail numbers of planes, and that becomes your life's work. Of course, these men have no idea what to do with the body after sex. That's not something they've thought through. They're a lot like dogs chasing cars: They're just following their instincts and don't know what they would do with the car if they ever caught it.

Female pornography is different. It is best represented by romance novels, which are almost all emotional engagement, which leads to genital interaction only in a long roundabout way. There are trials to go through first! As a bookseller, I've sold these novels, and some of them (like the Harlequin Blaze series) can get pretty steamy. Being a male, whenever I pick up one of these novels, I cut directly to the naughty bits. Evidently, women also enjoy the naughty bits, or they wouldn't be there, but they feel compelled to read the whole novel before getting to them. I think that's telling.

I don't mean to say that women are necessarily any deeper than men. Eavesdropping on single women talking about single men on internet forums, it seems to me that they can miss the boat just as easily as men can. "The Abductee" was meant to illustrate some of this – how clueless and gullible women can be about men, even in the face of obvious evidence right in front of them.

Both men and women tend to hopelessly idealize the other party and expect them to serve their own narcissistic needs. This leads to countless comedies/tragedies that arise not so much from the other party's treacheries but from the subject's own self-serving delusions that give the treacheries fertile ground to grow in.
Posted by Glenn Campbell at 12:42 AM