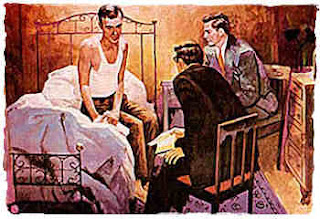 While waking up this morning, I came up with a new screenwriting art form! I call it the “atomic treatment.” It is a whole scene or movie reduced to FOUR LINES.
An atomic treatment is the first thing you should write before attempting a longer treatment or a screenplay. Because it is only four lines, you can experiment with a lot of scenes in a short period of time before investing in heavier writing. Those four lines should be fascinating in themselves or it is not worth writing more.
The four lines of the treatment are labeled like this: SET-UP, CONFLICT, ACTION, TWIST. (Each “line” can actually be composed of several sentences.)

I have even written one to illustrate the concept….

SET-UP: A drug addict lies sprawled on a bed in his underwear. He is having a “bad trip,” revealed through a rapid series of disconnected flashbacks and fantasy images. He is walking in “strawberry fields forever” and is obviously disconnected from reality.
CONFLICT: The addict’s girlfriend comes in, realizes he is high and panics. She tells him he’s late for work, and that if he doesn’t get there he’s going to lose his job.
ACTION: The girlfriend and a series of other friends valiantly attempt to get the addict moving. They get him dressed, drive him to work, and usher him down an office hallway, while the addict fades in and out of reality. They encounter a uniformed officer in the hallway who quickly grasps what is happening. However, he doesn’t arrest the addict as expected but instead helps the others get him to his place of employment. They all seem to realize that if he loses his job, they do, too. They get him to a door, prop him up, put a black robe on him and push him through the door.

TWIST: He walks into a courtroom via the service door and becomes a judge! The bailiff says “All Rise!” The lawyers and litigants have all been waiting for him. He takes the bench, all are seated, and he says “Proceed.”

If I had time (which I don’t) I could turn this treatment into a longer one, adding complexity to it, eventually leading to a whole screenplay scene of anywhere from one to ten minutes.
But the advantage of an atomic treatment is that I have written it in a couple of minutes. It is already a whole story that stands on its own. We can discuss it, abandon it or file it away.
This simple concept is a lot more significant than it might seem. For me, it is the whole Rosetta Stone that unlocks screenwriting!
Posted by Glenn Campbell at 10:01 AM