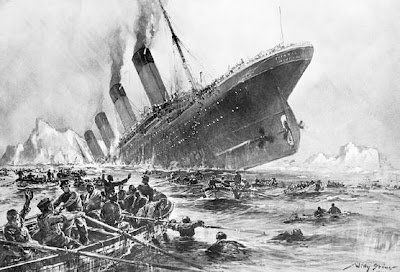 FADE IN: We are aboard the RMS Titanic in 1912. Outside an elegant dining room is a sign on an easel: “RMS Titanic Engineer's and Ship Builder's Banquet.” Inside, about a dozen well-dressed men are seated around a large banquet table. Their leader, the MASTER DESIGNER proposes a toast to the safest and most technically advanced passenger liner in the world, the Titanic.
Just then, the ship hits the iceberg. We know this because the whole room shudders, and we hear the distant sound of twisting metal. The empty china on the table shifts a few inches but does not fall. There is momentary distress among the gentlemen in the room and major panic in the hallways outside. Members of the serving staff come into the room to announce that the ship just hit an iceberg and is sinking. They are followed by the panicked kitchen staff, who look like they are ready to abandon ship.
Then the MASTER DESIGNER speaks. His booming and authoritative voice silences everyone else’s. This ship will not be sinking, he announces. The men in this room designed and built her, so they know what she is capable of. He orders the cooks and servers back to their stations. “We will now have our entrée,” he says.
Both the staff and the men in the room seem to be reassured, and things go back to normal. As the main course is served, the MASTER DESIGNER explains that the ship is protected by water-tight bulkheads, 15 of them. (He points to them on a blueprint.) Judging from the movement of the china, the hull was penetrated in the bow, but at worst only one of the bulkheads was breached. The remaining bulkheads will hold firm and keep the ship afloat. The ship may be crippled and some passengers in the forward chambers, especially the steerage class, may perish, but the ship will make it to port.
The MASTER DESIGNER then launches into an inspirational sermon on the advantages of intellect over emotion. Let the common passengers panic, he says. Those in this room are men of science and analysis. Someone crying “iceberg” should not phase them, because they have intelligence and theory behind them.
“Now,” he says, “Let us enjoy our steak.”
The group seems inspired by the speech. Indeed they seem almost giddy about their special skills and inside knowledge. Most of them eat and drink heartily, except for one YOUNG ENGINEER, who can only stare down at his plate in distress.
“But what if the hatches aren’t closed?” he asks aloud.
Everyone else is instantly silenced. The YOUNG ENGINEER goes on to say that there are six passageway hatches through each bulkhead, and the bulkhead is waterproof only if the hatches are closed. Since no one was expecting the iceberg, the hatches were probably all open at the time.
A heated technical debate then ensues between the engineers, with the MASTER DESIGNER maintaining that the ship will stay afloat and the YOUNG ENGINEER insisting that it will sink. A lot of technical language is thrown back and forth as the whole group pores intensely over the blueprints at one end of the table.
Finally the group reaches a consensus: If there any hatches were open at the time of the collision—which was almost certainly true—then water will breach the second bulkhead, and a chain reaction will compromise all of the bulkheads and sink the ship. Even the MASTER DESIGNER is now convinced. Furthermore, the safety expert in the group announces that there aren’t enough lifeboats for everyone, so any passenger who didn’t join the evacuation at the beginning probably won’t get a seat.
As if to confirm the diagnosis, the whole room suddenly lists to one side. Looking up from the blueprints, the men exchange shocked and frightened looks. Someone says: "We're doomed." The YOUNG ENGINEER was right! They all turn to look at him. The YOUNG ENGINEER is sitting at the other end of the table now, heartily eating his dinner. He appears cocky and proud to have made his point.
“Mmmm,” he says, “Good steak!" Posted from Charlotte, North Carolina. © 2008, Glenn Campbell, PO Box 30303, Las Vegas, NV 89173. Also see my other screen stories
Posted by Glenn Campbell at 4:27 PM